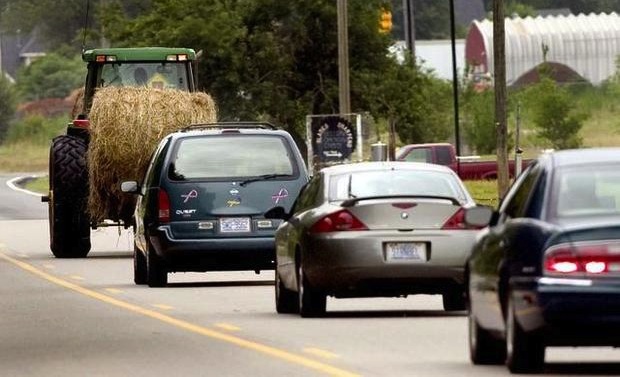 Many of us are annoyed by slow drivers on the road, especially if they are driving in the left lane.

But whether that driving at speed much lower than the maximum permissible speed of movement in a particular road section is a real traffic violation?

Before see what the Traffic Law says let’s remember that there is no such as a speed lane in populated areas!

The driver of a vehicle is allowed to use the most comfortable for him road lane, in populated areas, if the road has 2 or more traffic lanes in one directions indicated by a relevant road sign, and on which the maximum allowed speed of movement is  80 km/h.

According to the Road Traffic Law:

The driver of the motor vehicle is prohibited to drive at a low speed without emergency lights switched on!

An example of “unusually slow” driving would be if without a good reason, a vehicle is moving at a speed of 40 km/h, on a road with speed limit of 80 km/h and causing tailgating . A “good reason” could be bad weather or road conditions, the it is a slow moving vehicle, vehicle with oversized cargo and etc.

So if, without a good reason, any vehicle is moving too slowly and without emergency lights on it is a traffic offence.

Driving at a low speed in the left lane

That would be a violation only if the PPP on the road (with 2 or more lanes in one direction) outside of the village or multi-lane road in the village in which the maximum allowable speed exceeds 80 km / h.

Driver of a slow vehicle must be driven in the far right lane except when cornering or circumvention. On the road with three or more traffic lanes in one direction indicated by a road sign, the driver PPP can not develop or is not allowed to develop the maximum for the road speed is prohibited to enter the leftmost tape this direction, except when cornering or circumvention.

According the Road Traffic Law:

On a road with two-way traffic the driver is prohibited:

On the road with 2 or 3 road lanes in one direction the driver is forbidden to drive in the most left road lane id the other lanes are free.

How the electric bikes work?

Can We Control Electric Bike Through the Internet?